I have spent an unusually long time today going through my work notes.

Ironically, it was nothing work related. I was not looking for the installed capacity of the hydroelectric power plant we are financing in Georgia. I was most certainly not after the commercial loss reduction schedule of the Albanian electricity distribution company we are working with, either. As a matter of fact, it was something unexpectedly trivial I was fine-combing my notes for: namely, doodles. Nothing more than good old doodles – lost between endless series of electricity prices, capital investment programmes and indicators for power demand growth.

What are doodles exactly? Dictionaries define them along the lines of “scribbles drawn or written absent-mindedly“. Wikipedia describes a doodle as “a type of sketch, an unfocused drawing made while a person’s attention is otherwise occupied“. An important attribute of doodles is thus being created unintentionally, while the author is unaware of engaging in the process of “doodling” at all. As a result, doodles often appear during long telephone conversations, meetings or lectures. They can be both familiar objects such as stars, flowers, houses and little people, or abstract patterns and shapes. Doodles vary as far as their artistic value – some being high-quality, laborious work of art and others heading straight for the bin.

Having never taken doodles too seriously, I recently came across surprisingly vast related research. For example, some scientists claim that doodles could shed light on character traits of their authors. Drawings of houses apparently indicate home buddies; aeroplanes better fit travel-minded individuals. I would not even be surprised if it took somebody a full-blown PhD to deduce that.

Other researchers go as far as suggesting that doodling helps us better remember the content of a parallel conversation. One study had a group of people listen to a boring dialogue. The ones allowed to doodle demonstrated significantly better ability to memorise minor details mentioned by the speakers. The researchers argue that human minds naturally tend to wander – “day-dream” – during a tedious task, which proves to be most detrimental to attention. Doodling is however less cognitively demanding than day-dreaming and keeps part of the brain awake enough to record new information.

In short, doodling seemed to be of more importance than I ever thought. I was beginning to feel somewhat disappointed with myself for not having produced a single doodle in my life. Or have I? Doodling is supposed to be a subconscious activity. It could well mean that I had pages covered with doodle art without even knowing. Inspired, I decided to go through my work notes to check.

And I was not disappointed.

For a start, I found a map of the Nordic countries: Finland, Sweden and Norway. I solemnly swear that I have no recollection of how the map ever appeared on the back of one of my slides. Yet the fact that the drawing depicted a map gave the author away unmistakeably. Everybody knows just how much I love maps. I can spend a 3-hour flight looking at a route map inside an airline magazine. I won’t raise my head or utter a word. A map is an ever-unwinding story; an endless discovery. I suppose it would be only natural for me to doodle maps. Oh, and the handwriting was mine, too. 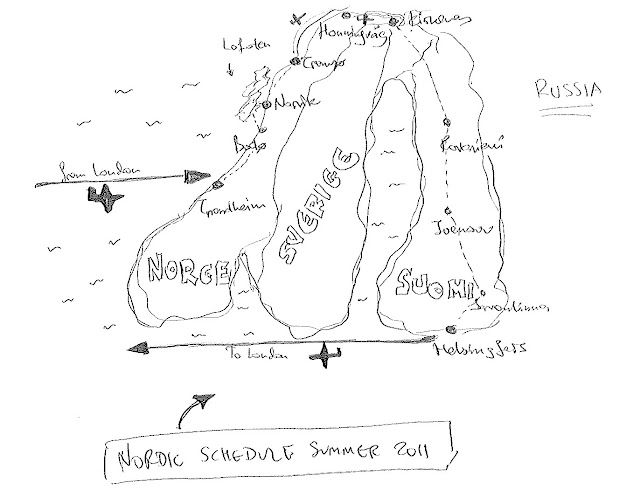 Besides the author’s passion for maps, the doodle left no doubt as far as her favourite travel region. I may toy with Greece and ex-Yugoslavia all I want, but my heart lies forever in the Nordics. I have already planned seven visits to the Nordic countries for 2011 – the culmination being a fortnight in Norway in July. Looking closely, I realised the map was in fact showing my originally planned route for that trip. From Norway’s Trondheim to Nordkapp via the Lofoten islands – and all the way south across Finland to Helsinki. Bingo! I certainly enjoy advance planning and dreaming long into the future.

What I love most about that map is, firstly, how things are put into a wider context (see the big mass of “Russia” to the east); and, secondly, how each country is labelled in the local language. My obsession with foreign languages is not a secret to anyone. The only thing I cannot explain is that English-spelled “Russia”, though. Even more strangely, I seem to have replaced “Helsinki” with its Swedish equivalent, “Helsingfors”. I suppose two years of brainwashing at Hanken were to blame.

Now imagine my excitement when, further going through my notes, I discovered a similar doodle-map, a couple of months older than the first one. Again, I hold no memory of how it ever appeared there. 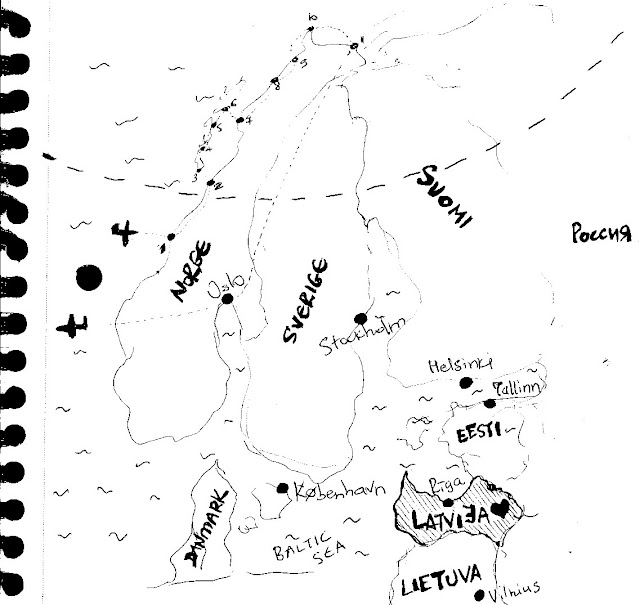 One can immediately see a number of improvements compared to the first version. On a practical note, I had clearly understood that two weeks were not enough to include Finland into my trip; the new route limited itself to Norway. Despite reducing my trip to a single country, I had drawn up more countries than before: Denmark, Estonia, Latvia and Lithuania all became part of the story. The visibly stormy “Baltic Sea” now had a name; “Russia” was appropriately spelled in the Cyrillic script; “Helsinki” was no longer bearing its oddly unfamiliar Swedish name; even Arctic Circle was now fashionably indicated by a dashed line.

And in case you ever hesitated which country I was coming from, I hope it, too, is now clear.

I did not find any more doodle-maps, but my interest in foreign languages was soon re-confirmed. From between the lines of some boring task list, I was suddenly attacked by an aggressively looking phrase. You will just have to trust me that the impressive mouthful merely reads “ringtones are all annoying” – in Finnish, of all possible languages. After a bit of thinking, I recalled it was a line from the masterpiece performed by Helsinki Complaints Choir, best sung to the world-famous Nokia tune. I must have been seriously annoyed by a particular ringtone at the time. I think I even know which one it was. 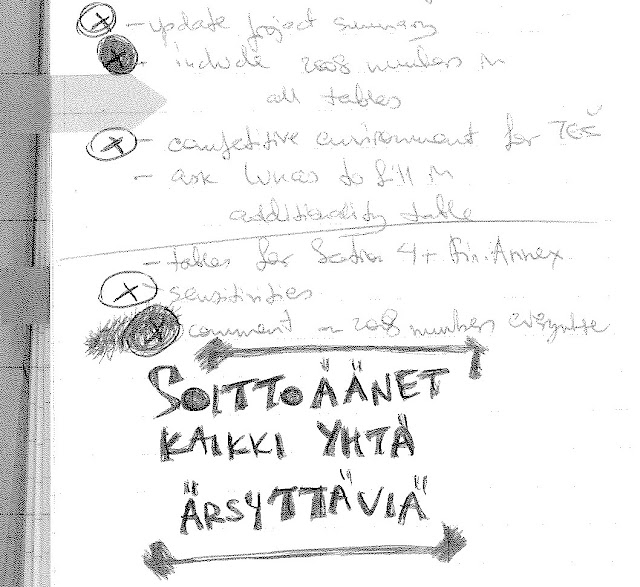 That Finnish phrase got me a little worried. Before starting my search, I had expected to find a lot of girlie kind of flower doodles. Or girls in white dresses doodles. Or cream-coloured ponies and crisp apple strudel doodles. Whatever – I had certainly not expected to find maps, Arctic circles and frowning phrases in Finnish. Was I really not girlie enough to draw up a little flower (or two) in the corner somewhere?

Imagine my relief when I did spot a flower. All thorny and not exactly the kind of flower you would want to be given for birthday – but a flower nonetheless. 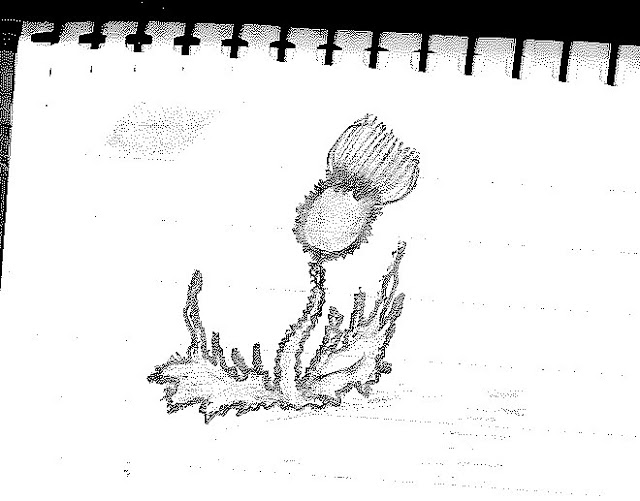 So, maps, foreign languages, ringtones AND thistles. I think I am calling the doctor right now. One response to “What’s in a doodle? Self-discovery through scribbles”