My Balkan adventures finally resumed after a four-month break. The choice of the destination wasn’t a difficult one. Believe it or not, I had for a while entertained the idea of visiting the Croatian town of Vukovar.

Yes, Vukovar – the one that suffered mass-scale devastation during the Croatian War of Independence (1991-1995) and has seen its population more than halve as a result. The siege of Vukovar lasted for 87 days; the city surrendered to the Yugoslav People’s Army forces on 18 November 1991. By that time, 90% of the buildings were destroyed and over 20,000 residents killed or forced into exile. Indeed the destruction of Vukovar has been the worst in Europe since World War II.

And that was the town I wanted to visit.

If you are wondering why on earth that particular place, you are probably not yet familiar with my somewhat irrational obsession with Western Balkans. Also, I have already described my photographic interest in capturing derelict buildings. Finally, it simply sounded like a great idea to visit a less obvious destination like that.

Vukovar isn’t within easy reach of London. The planned trip juggled all of the following methods of transportation: (1) two night buses from my London home to Victoria station (30 minutes); (2) a 5am bus to Luton Airport (1 hour); (3) a plane from London to Zagreb (2 hours); (4) a bus from Zagreb to Osijek (4 hours); (5) a bus from Osijek to Vukovar (1 hour); (6) yet another bus from Vukovar to Belgrade (3 hours) and – finally! – (7) a plane from Belgrade back to London (3 hours). Oh, and (8) a 1.5-hour Tube ride from Heathrow to my place. Overall, 470 kilometers of road travel and four stopovers – in just about two days. What a nightmare, I hear you say. 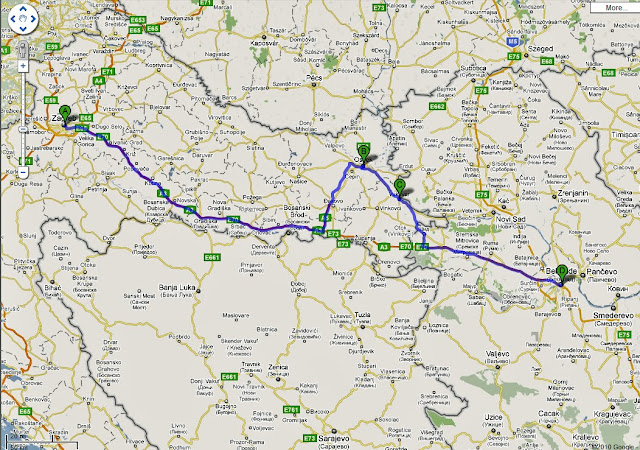 Not quite – it actually all worked out perfectly! As soon as I had reached Zagreb, I was picked up by a friend and taken to a wonderfully snowed-in mountain of Medvednica in the vicinity of the city. Our first stop was Medvedgrad, a medieval fortified town located on the mountain’s southern slopes:

After which, not quite convinced by the height, we progressed to Medvednica’s highest peak, Sljeme (1,033m) – well-known for its skiing complexes and Zagreb’s TV Tower (169m):

Finally, I got a cosy ride to Zagreb’s bus station and set off for Osijek – Croatia’s fourth largest city and the main one in the eastern region of Slavonia. The journey took absolutely forever – and I have to say I was not too impressed on arrival, either. I would not be surprised if it turned out I was indeed the only foreigner in town that freezing night – and one of the very few people hanging out outdoors. Oh well, at least Hotel Central was very, erm, central and possibly Osijek’s main attraction. After attacking some nationalistically inspired graffiti, I discovered Osijek’s glorious river Drava. It was too late, too dark and far too cold for decent photos, but I did try:

…The sunrise the next morning saw me heading towards Osijek’s unassuming bus station for a transfer to Vukovar. Just before leaving, I caught this wonderful glimpse of Osijek’s train station:

After a quick bus ride, I had finally reached the main destination of my trip – Vukovar. The town was every bit as expected in the sense of sustained destruction – but differed from my expectations otherwise. Firstly, it made an initial impression of a cosy and sleepy place, making it difficult to believe what happened there years ago. Secondly, it seemed much smaller than I had imagined – I kept thinking the city’s physical size was too large for its remaining population. Before the trip, I had been asked by a colleague working with real estate projects to take as many photos of Vukovar as possible – as an illustration to the destructive powers of war. I duly performed:

What struck me most was, predictably, the city’s disused water tower. Built in the 1960s and nearly sieved through by wartime bombing attacks, it has never been renovated. It just stood there in front of me as a silent monument to human aggression. With tears in my eyes, I took over a hundred photos of the water tower alone:

Three hours had passed, and I could not take another sight of a destroyed building (see my Flickr photo set for Vukovar). It was the time to leave for Belgrade. At the bus station’s coffee shop, I had my heavily Croatian “ovdje” corrected to Serbian “ovde”. I should have just followed my Balkan friends’ advice and spoken English in the first place! After a short stop in the Serbian borderline town of Šid, I finally reached Belgrade. It was my second visit to the capital, which I have already described (albeit rather abstractly). All I can add is that I can’t wait to return one day soon (and definitely in August this year):

I returned to London a different person. Two days, one hell of a journey. I’ll be back!

To Russia, with love: Going back to my roots

A day in Chernobyl

2 responses to “Via Vukovar”

This my my great aunt Lida in Russia 🇷🇺. Onc

Spectacular Lake #Baikal 🌊 on my recent trip to

A Sufi poses in front of Shah Jahan Mosque in #Tha

I found #Pakistan 🇵🇰 rather a challenging co